We’re just back from a 10 day trip to the UK, our first since we moved to France two years ago. It was a bit of a whirlwind tour, with a lot of travelling, but lovely to visit friends and family in some of our old haunts.

Our first stop was with my mother in Lincolnshire, on the East Coast. We’re a long way from the sea here in Auvergne, so we obviously took the opportunity for a stroll along the prom. There were a few other people around, but the tide was a long way out, and the beach was mostly empty. The place already had a slightly melancholy out-of-season feel, which I have to confess I prefer to the noise and crowds of high summer. 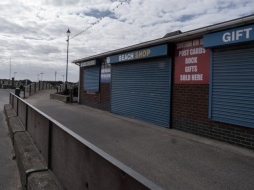 The beach has changed a lot since my parents first moved to the area. The coastline is subject to erosion and flooding, so sea defences are very important. In recent years, the level of the beach has been raised several metres by adding tons and tons of sand. This apparently absorbs the force of the waves as they break. Before this, the sea defences used to consist of concrete sea walls and regular lines of wooden breakwaters, which stretched off to the horizon as you looked down the beach. Here are some old photographs, taken, I think, in the late 1980s, when I was going through an arty black and white photography phase.

It looks a lot more natural now, but I do miss those breakwaters, which were all individually broken and weathered, and covered in seaweed and mussels.

We only had time to linger for a couple of days, then it was off on the next leg of our trip – to be continued…